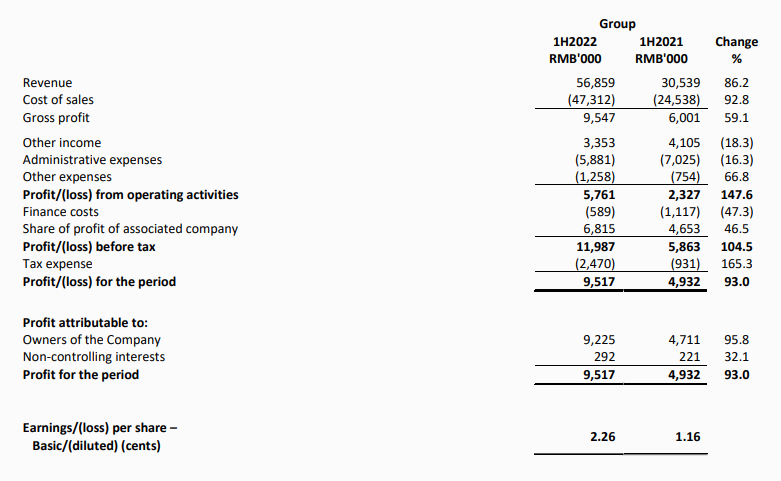 Revenue rose by RMB 26.3 million to RMB 56.9 million mainly due higher revenue from sales of goods from supply of construction materials as well as rendering of city urbanization services, offset by lower revenue from lease of equipment.

For the similar reasons mentioned above, gross profit rose by RMB 3.5 million to RMB 9.5 million.

Other income fell by RMB 0.8 million to RMB 4 million mainly due the absence of gain in fair value of financial asset, offset by gain on disposal of plant and equipment.

Other expenses rose by RMB 0.5 million to RMB 1.3 million mainly due loss in fair value of financial asset and impairment losses on trade and other receivables.

Given the above, net profit for 1H2022 rose by RMB 4.5 million to RMB 9.2 million, net of non-controlling interest.

Total non-current assets rose by RMB 5.5 million mainly due to the following significant changes during the period:

Total current assets rose by RMB 13.1 million mainly due to the following significant changes during the period:

Total non-current liabilities fell by RMB 0.7 million mainly due to the following significant changes during the period:

Total current liabilities rose by RMB 10.0 million mainly due to the following significant changes during the year:

Total equity attributable to owners of the Company or Shareholders’ Equity rose by RMB 9.0 million due to profit for the year of RMB 9.2 million, offset negative other comprehensive income of RMB 0.2 million.

Cash flow from investing activities rose by RMB 41.9 million mainly due to absence of (a) payment of tax in relation to the disposal of subsidiaries and (b) loan to associated company (Ranken Railway).

Given the above, cash and cash equivalents rose by RMB 3 million during the period.

As challenges from the spread of the highly contagious Omicron variant of the coronavirus remained unabated, the Chinese economy continues to face uncertainties.

Over the past several decades, China’s strong economic growth has gone hand-in-hand with urbanisation and China's urbanisation rate of permanent residence hit 64.72% in 2021, according to the country's top economic planner. Over the past year, the country has seen an accelerated trend of rural residents moving to cities, said the National Development and Reform Commission.

According to China’s 14th Five-Year Plan (2021-2025), it aims to raise its urbanisation rate to 65% in the period with a focus on people-centered approach in advancing new urbanisation strategy, promoting the high-quality development of urbanization in 2022.

These include plans to facilitate about half of the rural migrants to settle in five super-city clusters, including the Beijing-Tianjin-Hebei region, the Yangtze River Delta, the mid-Yangtze River area, the Greater Bay Area, and Chongqing-Chengdu city cluster. Each cluster will be designed to enable both “domestic circulation” and serve as hubs in facilitating “external circulation” between China and the global economy.

According to a World Bank report, the Chongqing-Chengdu metropolis will serve as a center for the development of western China, a gateway for the Yangtze Economic Belt, a logistics node for the Eurasian overland Belt & Road Initiative and a strategic economic fulcrum for ASEAN.

Chengdu is our key operating market and in July 2022, the Chengdu Municipal Bureau of Housing and Urban-rural Development officially issued the "Chengdu "14th Five-Year Plan" Urban Construction Planning Opportunity List, highlighting 60 projects with a total investment of about RMB 372.1 billion. In the list of "urban organic renewal" projects, there are 21 projects in the urban organic renewal project category, involving high-tech zones, Jinjiang District, Wuhou District and other districts (cities) and counties.

In major Chinese metropolises, much of the infrastructure built in support of expansive urban development is now reaching a critical point in its lifecycle, with many under-utilised land parcels and buildings in need of significant repairs or even complete overhaul.

Hence, there is a growing need for future communities that combine the characteristics of both residential buildings and community public service that focuses on improving people’s daily life experience. These will particularly arise from sizeable improvements in cross-city transit systems, mixed-use residential-recreational-commercial developments, and the adoption of renewable energies.

In addition, on the back of increasingly stringent environmental protection regulations in China and to combat climate change, the greening of industrial parks in China - where large-scale industrialisation activities are primarily located in China - and transforming them into “eco-industrial parks”, will offer new business opportunities where the Group can offer integrated building estate management services with water and environmental conservation solutions, given our track record in water and environmental conservation projects.

With a service-centric approach, the Group aims to generate recurring income by providing a comprehensive suite of services related to city redevelopment and eco-industrial parks. 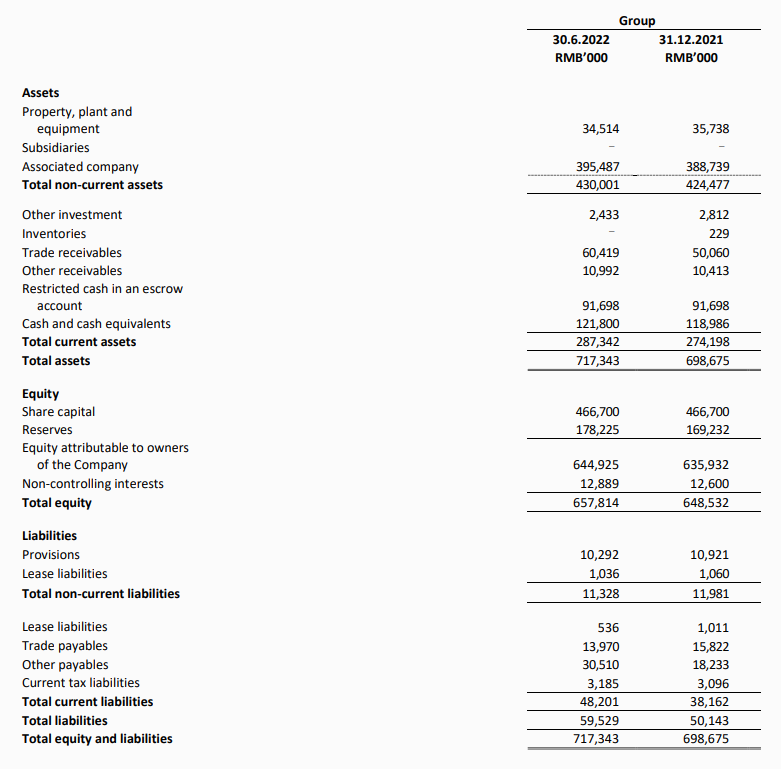